The #letsmajaz musical season took off on Friday night (December 6), with legendary Iraqi musician Ilham Al Madfai and the Iraqi-Swedish musical band, Tarabband kicking off the series of concerts with their much-awaited performance at the Al Majaz Amphitheatre.

Al Khalidi, who performed songs written by her and the band, opened the night with the hit number ‘Oudi Li Diyarek’, which ignited the receptive audience. She then performed another hit, ‘Ashofak Baadeen’.

She followed these up with a selection of carefully curated traditional songs that speak of people’s issues and depict their love and yearning for the homeland. Al Khalidi’s beautiful high voice pitched her hit song ‘Chobi Baghdad’ perfectly, earning thunderous applause from the enthusiastic audience.

She then joined her band members in performing the Iraqi ‘Dabke Chobi’, a famous Iraqi folk dance, which made the crowds jump to their feet, cheering and dancing to the beat. This was followed by the hit number ‘Helli’, hugely popular among the Arab music lovers. All throughout the performance, the band kept up a running conversation with the audience, using the universal language of music.

Al Khalidi concluded the evening with a profound expression of thanks, paying rich tributes to the emirate of Sharjah and the management of Al Majaz Amphitheatre. Expressing her extreme delight at performing in Sharjah for the first time, Al Khalidi said: “I am so delighted and proud to perform for such an enthusiastic audience. This is my debut concert in Sharjah. We came from Sweden to speak the language of music, and I am always keen to introduce Arabic arts and musical history to the world.”

The second part of the evening had internationally musician Ilham Al Madfai regaling the audience with a fusion of Iraqi-Arabic and western music, picking the best of his four- decade musical repertoire. It included hit numbers that creatively combine classic Arabic Tarab and western notes.

The ‘Beatle of Baghdad’, who is widely recognised as the first Arab musician to create compositions and improvisations offering a mix of eastern and western music, presented a collection of numbers that took the enthusiastic crowd on a journey into the realm of nostalgia.

Al Madfai then invited Nadin Al Khalidi onstage to join him in performing some of the most beautiful songs of the late Iraqi legend Nazem Al Ghazali. The duo performed Al Ghazali’s hits ‘Taláah Min Bait Abooha’, and ‘Ya Mahla Noorha’ that made his fans emotional. Al Khalidi expressed her delight to perform with Al Madfai who had influenced her career, amid thunderous applause from the audience.

In a special salute to Iraq and the entire Arab world, Al Madfai concluded the evening with the Iraqi National Anthem ‘Mawtini’. He thanked Sharjah and the management of Al Majaz Amphitheatre for hosting him. He said: “It is a great honour for me to perform at Sharjah’s Al Majaz Amphitheatre, and I am so happy to meet the audience in Sharjah and perform the songs they love to hear. I hope to see you all again here, in the country of goodness, love and beauty.” 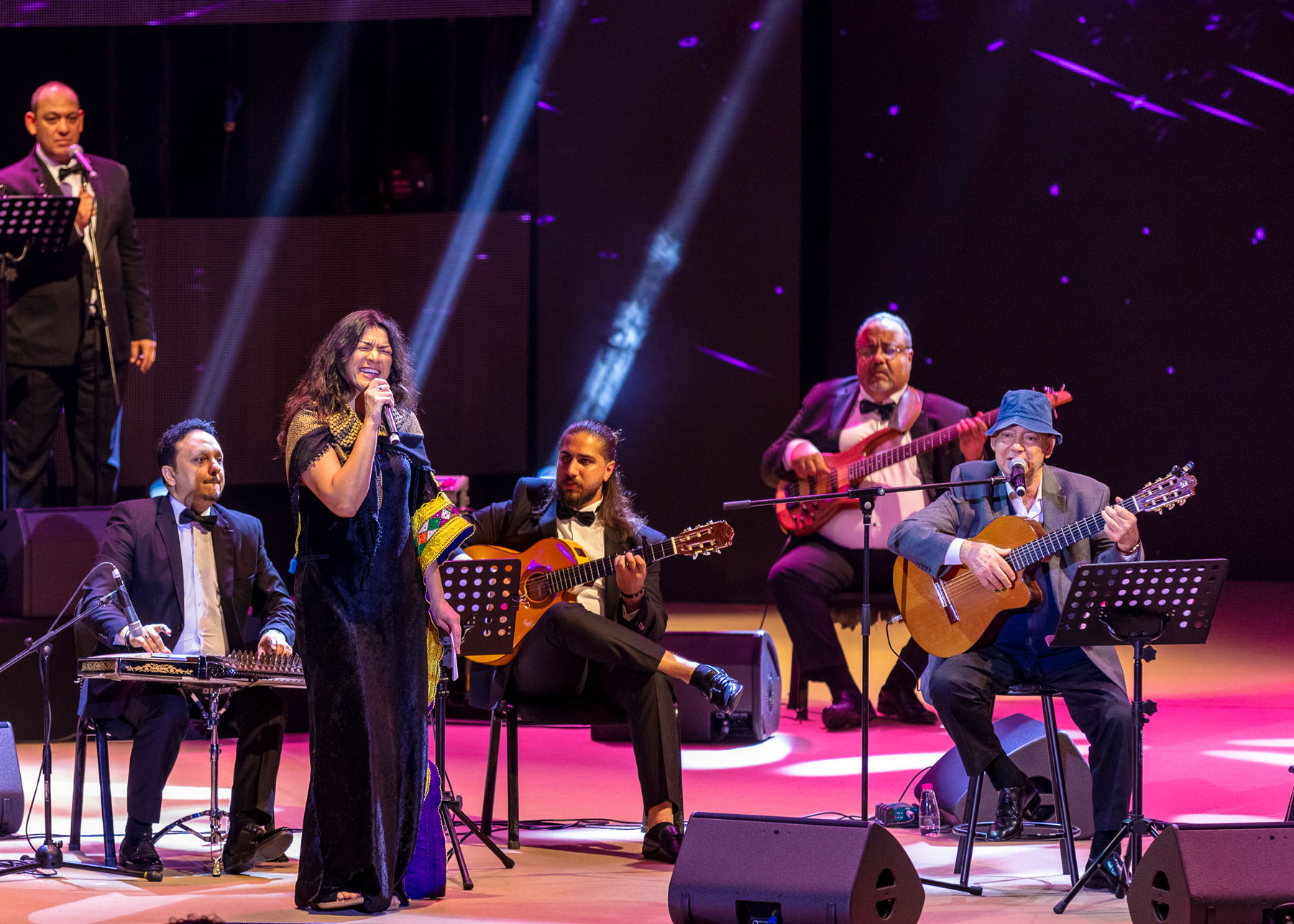 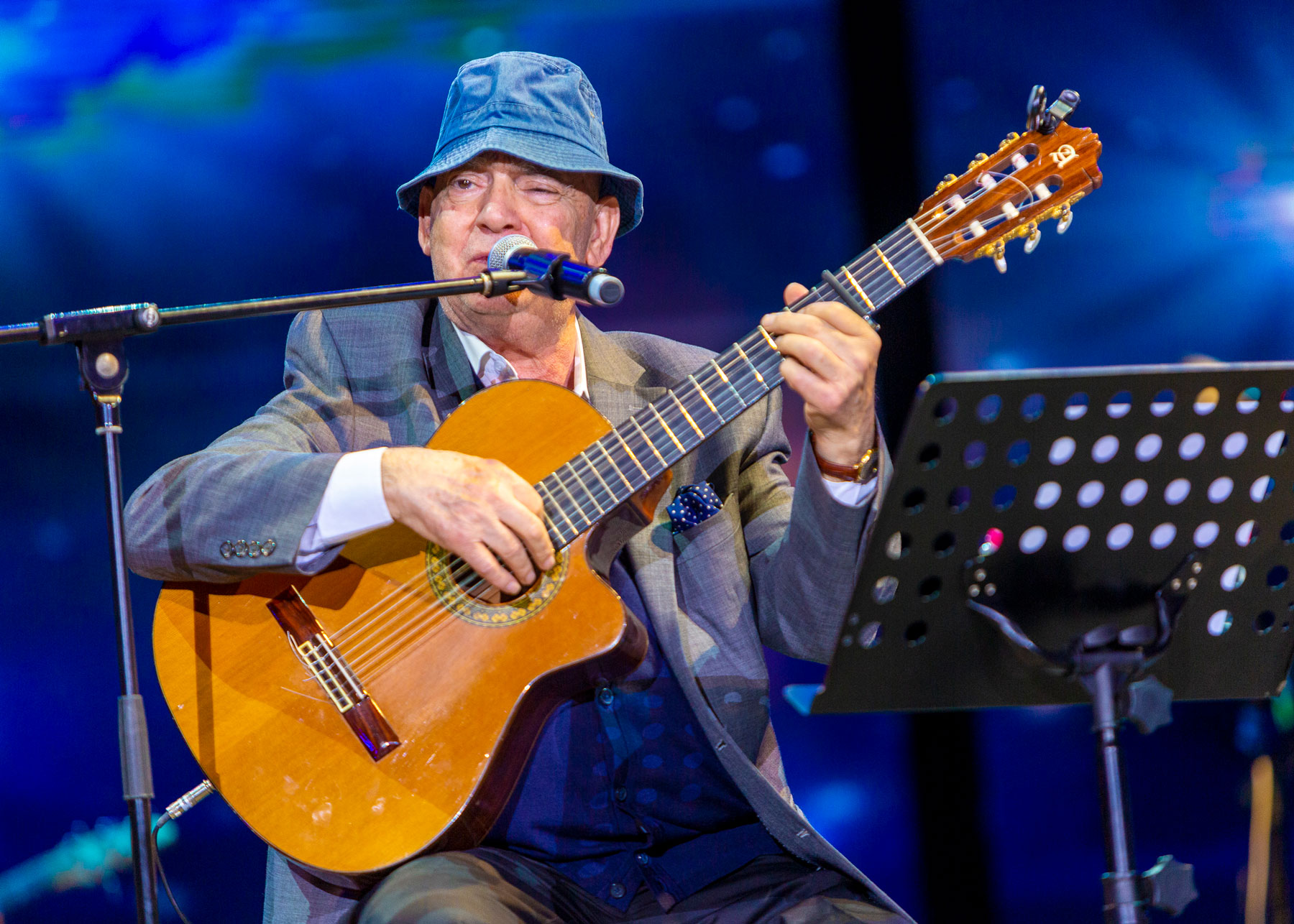 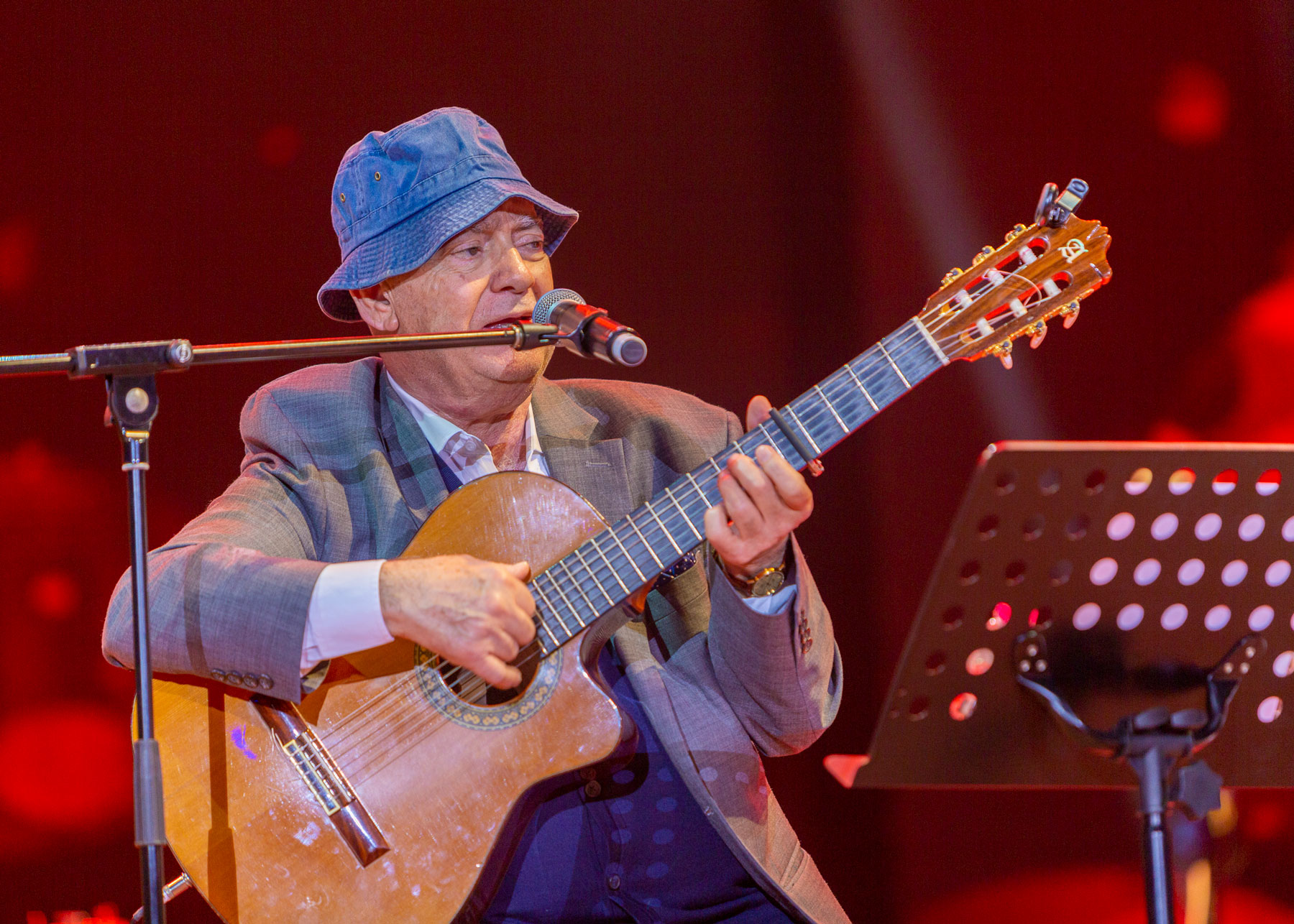 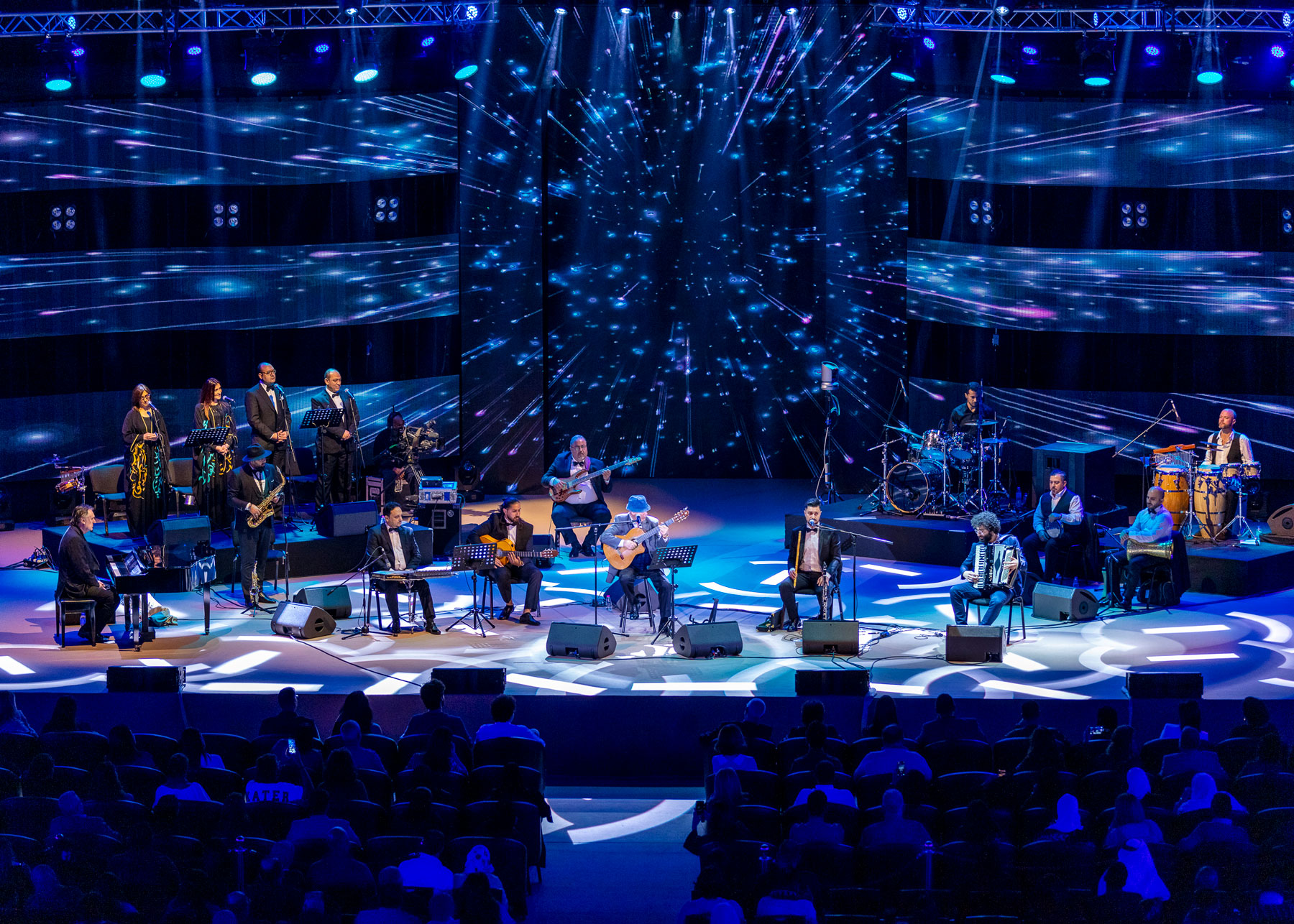 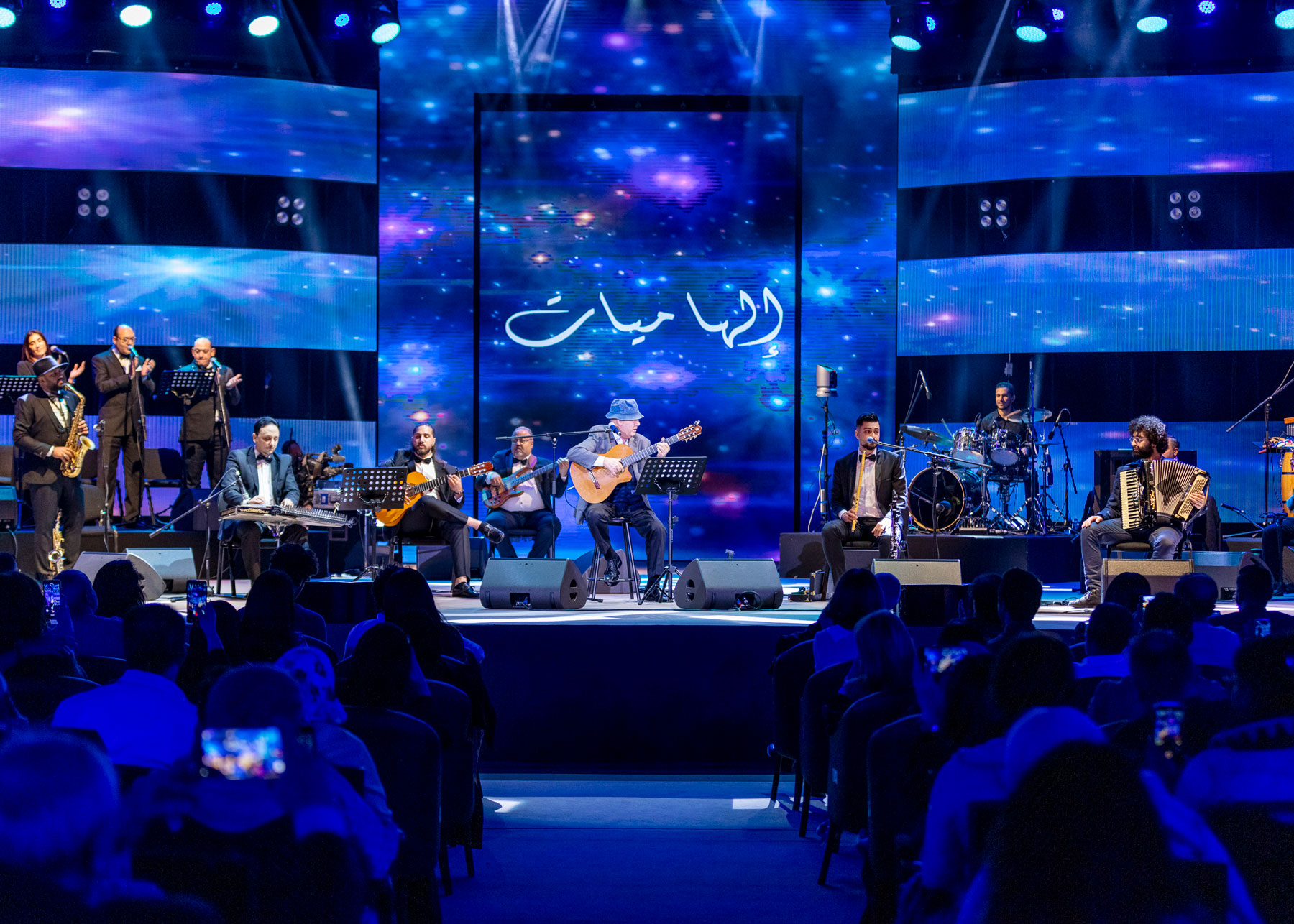 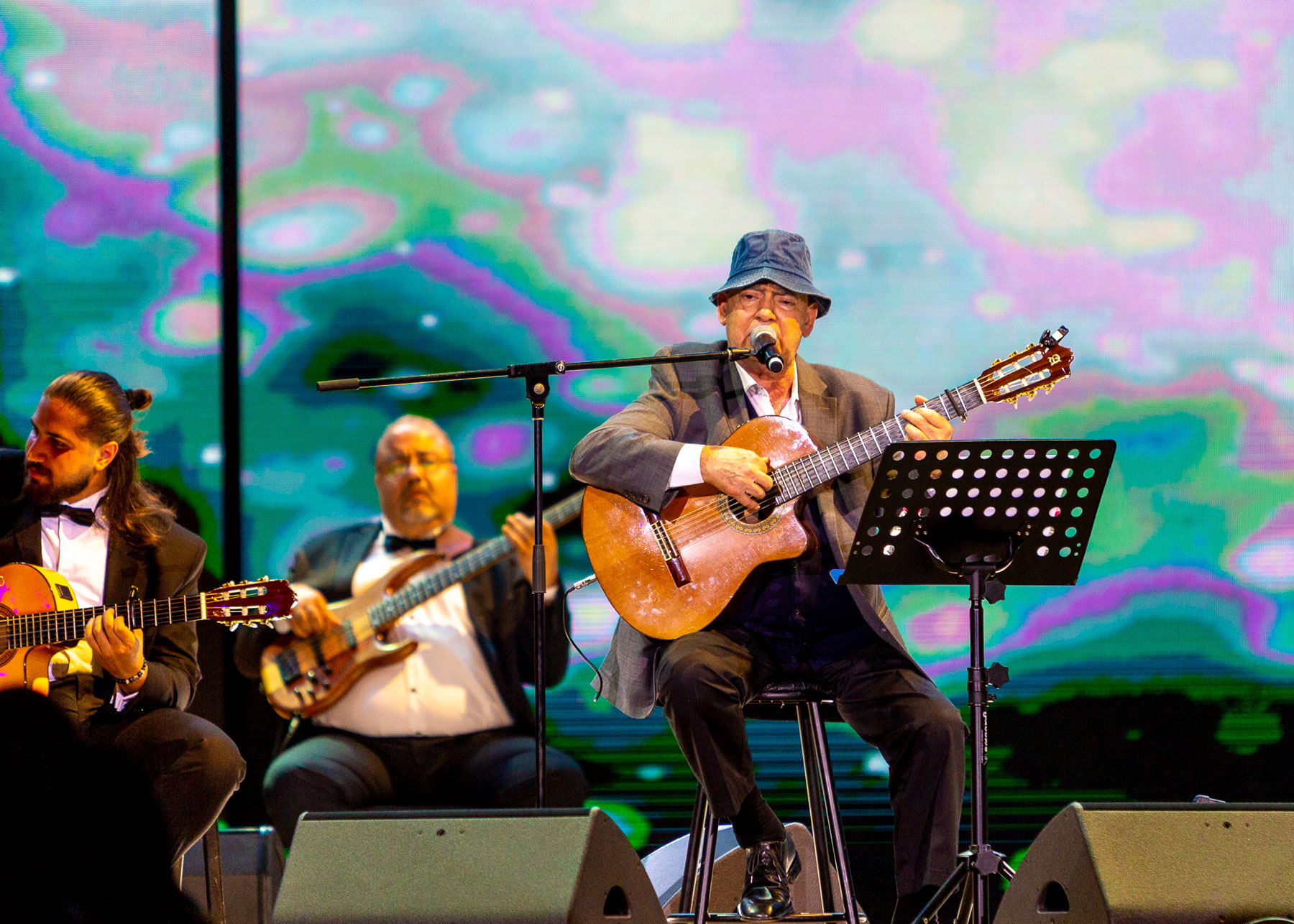 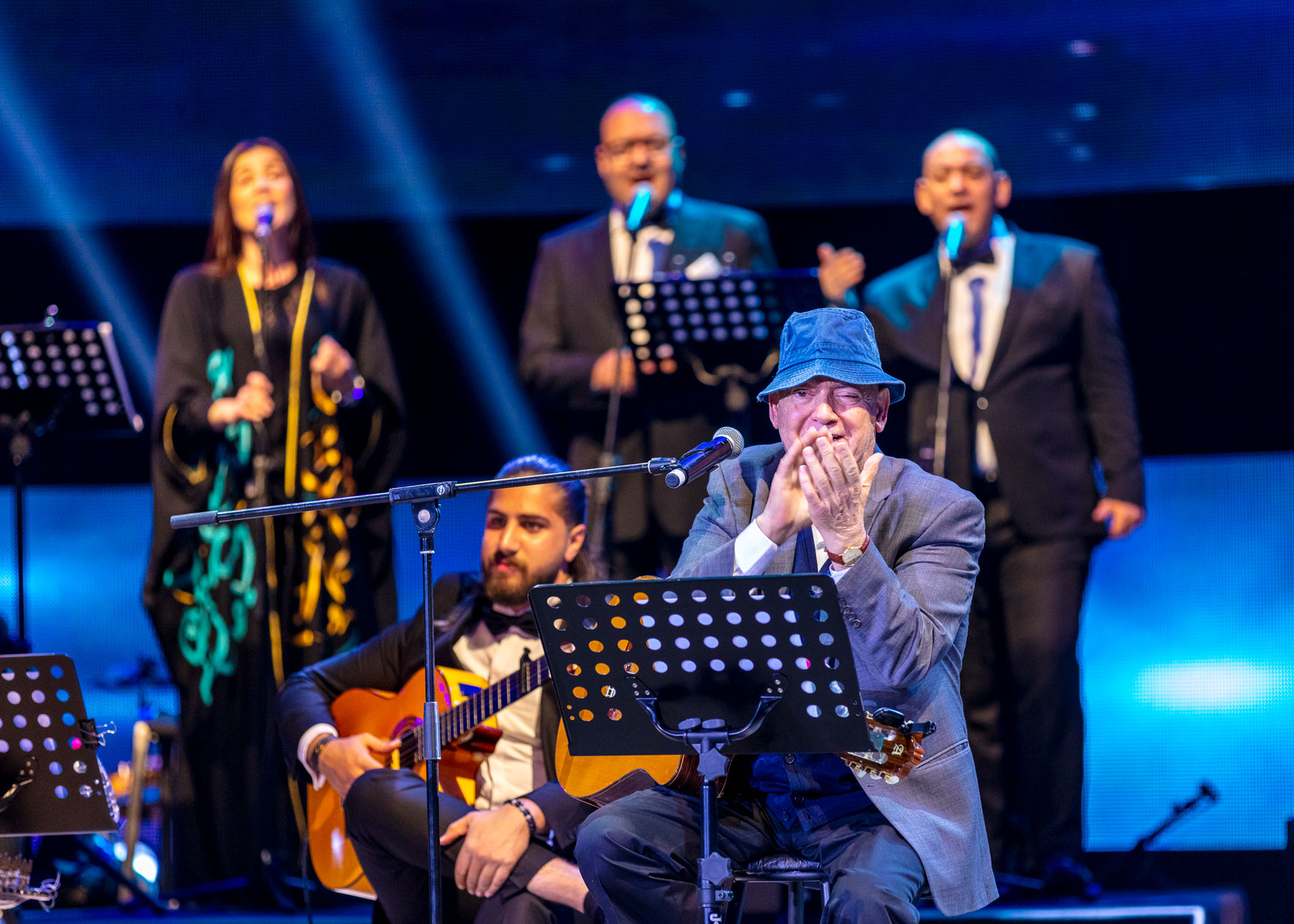 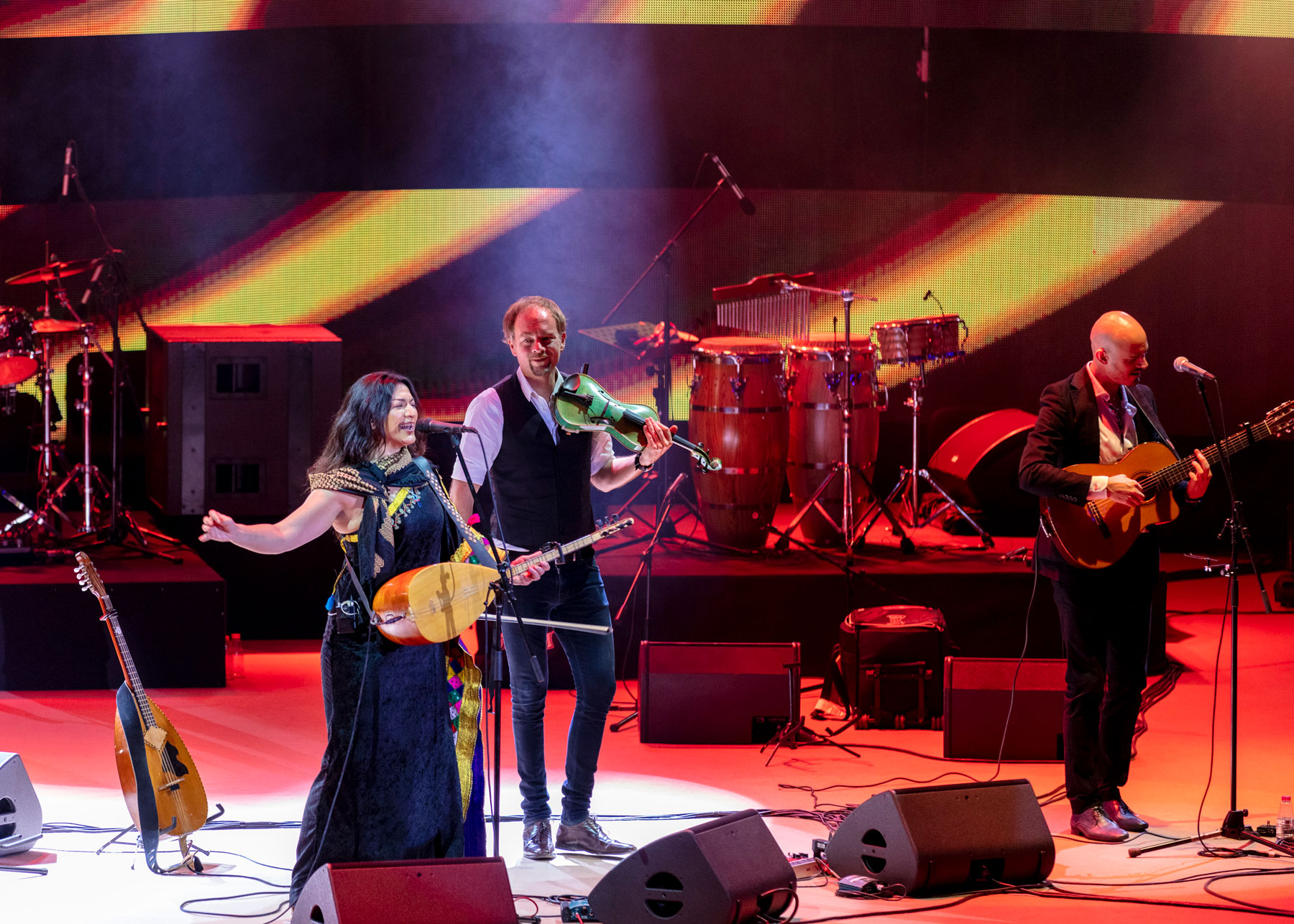 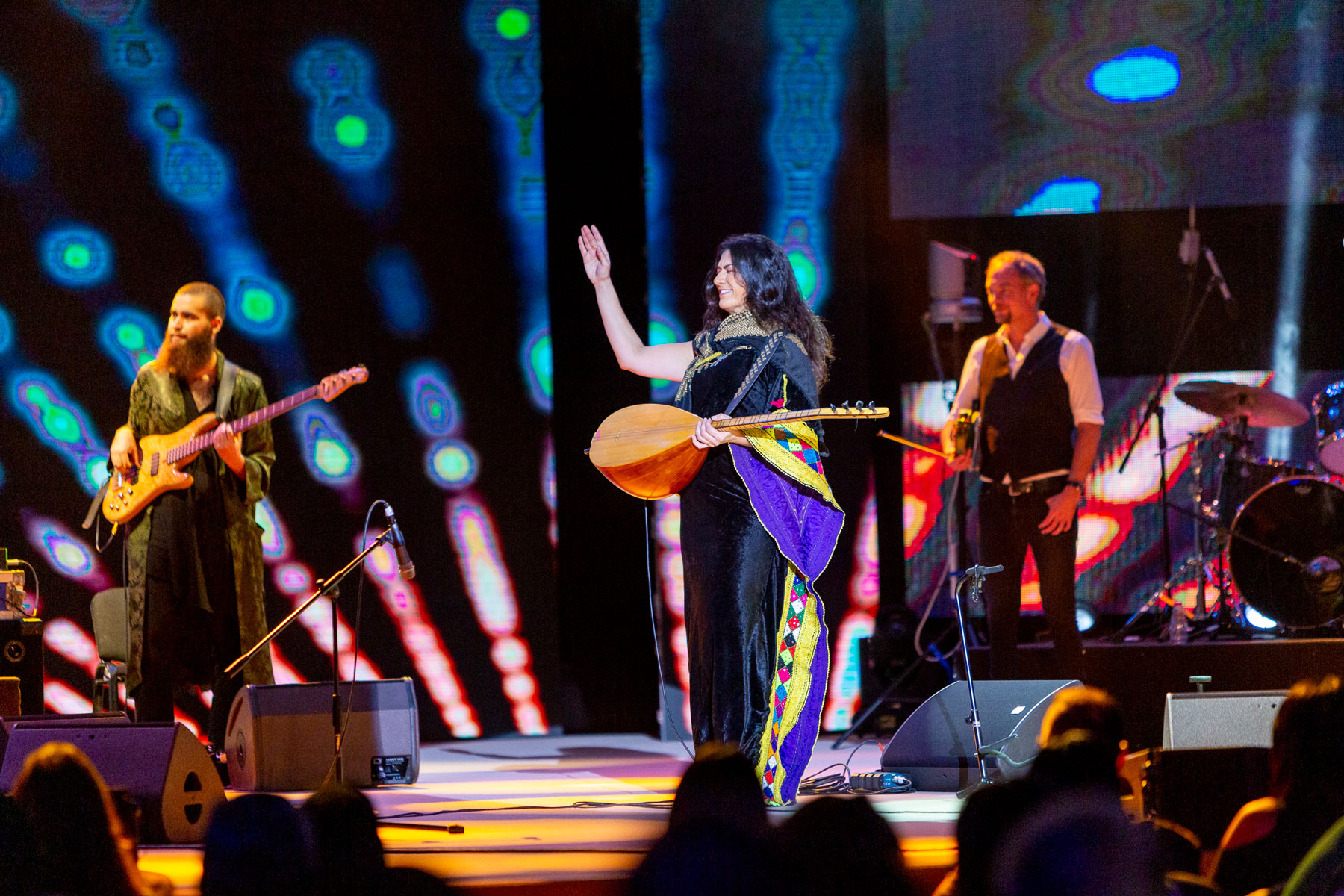 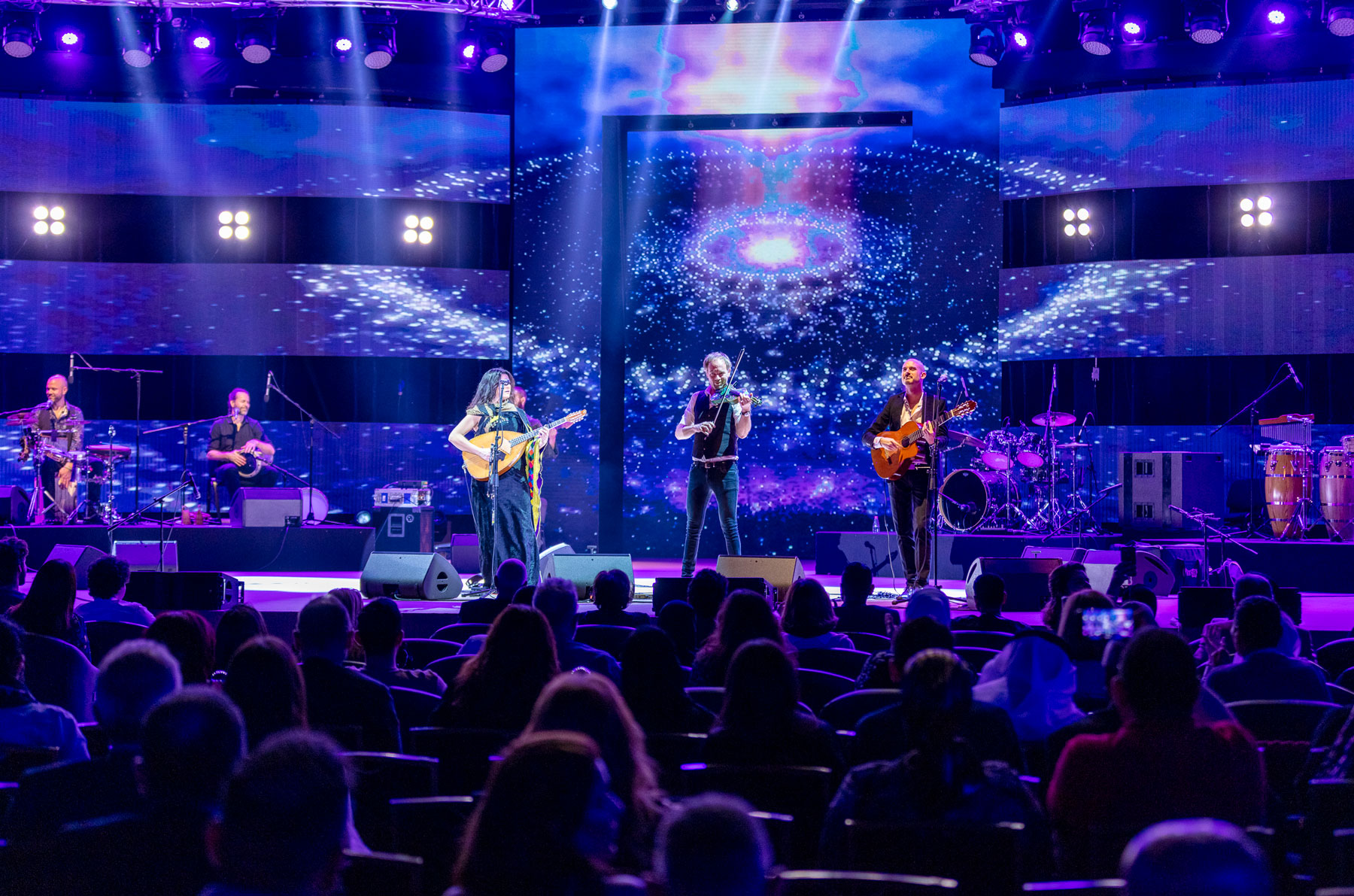 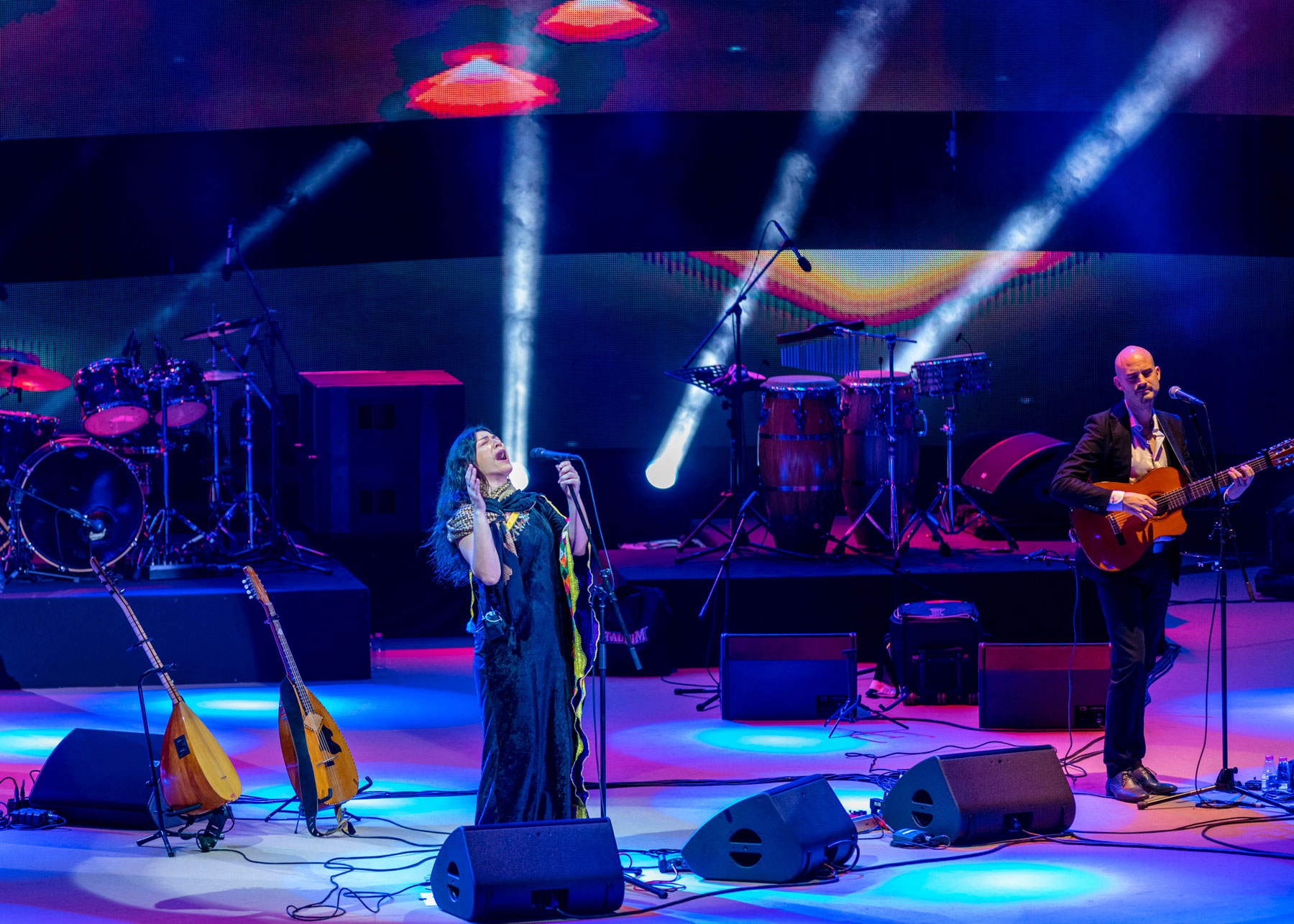